Mari is a DISNEY NINJA.

In addition to writing for Disney, Mari is a Disney super nerd. She's been to Disney World in Florida, Disney Land in California, Disney Paris and Tokyo Disney. Her favorite ride is THE HAUNTED MANSION.

Ice cream! And her favorite flavor ice cream is cookies and cream. She also loves pizza. Especially with pineapple on it! While somewhat controversial, she loves marshmallow peeps and candy corn, too! Her favorite candy is Kit Kats.

She works all year long on elaborate costumes to wear at conventions like Comic Con and DragonCon. She especially likes "mash-up" costumes where she takes two fandoms and mashes them together into one costume.

Mari is a snowboarder.

While she's lives in Texas now, when she grew up in the northeast in Massachusetts. And every weekend she'd pack up the car and go to the mountains to snowboard. (She can ski, too, but much prefers snowboarding.) The Vermont mountain of Stowe was the inspiration for her book, GOLDEN GIRL. 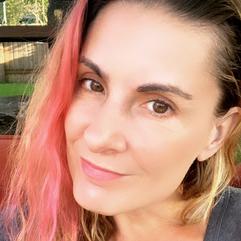 Mari is a huge reader

In addition to writing, Mari also loves to read. Her favorite types of books are sci-fi/fantasy novels though she also enjoys horror. .

Mari Mancusi  is a former Emmy award winning TV producer and author of more than two dozen sci-fi/fantasy books for kids, teens and adults. Her bestselling series have been chosen as featured selections in the Scholastic Book Fairs and clubs and have been selected by the American Library Association as “Quick Picks for Reluctant Readers” and “Popular Paperbacks.” In addition to writing, Mari is an avid cosplayer, horror aficionado, and MMORPG gamer. She lives in Austin, Texas with her husband and their young daughter.

Favorites include SKYRIM, THE LAST OF US, the FALLOUT series, the FINAL FANTASY series, and WORLD OF WARCRAFT. Sadly, she cannot play first person shooters because they make her sick to her stomach.