“I have one final question,” Melvin continued. “Before we enter Morgana’s chamber.” He turned to her, his wizened eyes piercing her with a sharp intensity. “One very important question.”

“Y-yes?” she whispered, drawing in a shaky breath.

Melvin gazed at her solemnly. “Why haven’t you done the dishes yet?”

“Sophie! I’m not going to ask you again!”

Lady Bella, aka twelve-year-old Sophie Sawyer, groaned as she yanked off her headphones and threw them down on her computer desk. Seriously? Seriously? Shaking her head, she banged out a message to her friends.

She rose from her chair and walked around her unmade bed. She had to admit, her father had a gift. A really, really annoying gift.

She pulled open her door. “Sophie? Did you hear me?” her father was still barking from downstairs.

Oh, she’d heard him all right. All ten times in the past ten minutes. Problem was, she couldn’t exactly explain to him that though it might appear to the un-geeked eye that she was just sitting in her room messing around with her computer, she was actually in the middle of something pretty epic.

And the dishes would have to wait.

She stuck her head into the hallway. “I’ll be right down,” she yelled, hoping to score five more minutes of peace. Enough time to get through this last fight. The three of them had been building up to this battle for over a year now, leveling up and gaining the skills it took to bring down the numero uno boss of Camelot’s Honor, the evil sorceress Morgana. She couldn’t log out now.

Returning to her computer, she jammed the headphones back over her ears.

Grabbing the mouse, Sophie placed her character into position alongside her teammates, Lord Vanquish (her best friend Stuart Mallory) and SirMelvin01 (a surfer playing from somewhere out in California). Pressing a few hot keys, she prepped her shields, readying herself for the fight. As a shape-shifting druid, Lady Bella had the most important role in this battle. Also, the most difficult. She needed to morph herself into bird form, then fly above the sorceress, disarming her force field before Morgana could cast her annihilation spell. If Sophie failed to do it in time, it was game over for sure.

She gritted her teeth. But she’d practiced this. She would not fail.

They stepped through the doors, into the sorceress’s inner sanctum: a windowless chamber with black walls and high ceilings disappearing into the darkness. For a moment, the chamber appeared empty. Then Morgana drifted out from the shadows, the music swelling in her wake.

“Foolish mortals,” she purred. “Do you really think you can defeat me?”

Lord Vanquish charged the sorceress, shield up and sword ready.

When he reached her, he slashed down hard, a bite that should have cut her to the bone. Instead, the blade bounced harmlessly off her skin—her magical force field protecting her from any harm.

Morgana cackled, raising her hands above her head, a cloud of black smoke swirling as she drew energy from the elements to aid her cast. Then a firebolt shot from her fingers, striking Lord Vanquish square in the chest. Only Melvin’s lightning-fast heal kept him upright.

Melvin turned to Bella. “It’s all up to you.”

Bella nodded grimly, using her magic to transform herself into an eagle. Then, beating her wings, she took flight, soaring high above the rafters. Once in position, she locked on to the small tear at the top of Morgana’s force field. The one weakness—sure to bring the sorceress down. She began her descent, heart slamming against her rib cage, ready to—

“You better not be playing that video game!” Dad cried, bursting into the room. Startled, Sophie knocked the mouse with her hand and the game spun, completely distorting her perspective. By the time she regained control, Lady Bella was on the ground. Dead. Along with Lord Vanquish and Sir Melvin.

“No!” Sophie cried, staring at the screen in dismay. “You killed me.”

Her father rolled his eyes. “Funny. You still look pretty alive to me. Which makes me wonder why you haven’t done the chores I assigned you this morning.” He wagged a finger in her direction. “Get to it, young lady. I’m not going to ask again.”

Sophie slumped. “Fine,” she said. “Can I at least say goodbye to Stu first?”

Her father frowned, looking as if he wanted to argue. Then he sighed. “Five minutes. Then I want you off the computer for the rest of the day. Go get some sunshine or something.”

And with that, he stormed out of the room, slamming the door behind him. Sophie could hear his loud footsteps clomping down the stairs.

Leaning back in her chair, she scrubbed her face with her hands. Lady Bella now stood resurrected in the graveyard next to Lord Vanquish and Sir Melvin. Alive again, but all for nothing.

They’d been defeated and the online game wouldn’t give them another chance at slaying the sorceress for the next five days.

“What happened? You totally had it!” Stu cried on the other end of the line. She could hear the disappointment in his voice. Stupid Dad. He had no idea how his interruption of Sophie’s virtual world affected other people’s real lives.

“What can I say? My father has an epic finishing move.”

She stared glumly at the screen, where Melvin was saying good-bye as he prepared to sign out of the game. She quickly private-messaged him an apology. After all, the guy was a good player and had become an online friend, though neither she nor Stu had ever met him in real life. She didn’t want him to get annoyed at them and decide to leave their guild.

“You can say you’re getting a lock on your door for a start.”

Sophie snorted. “Yeah, right. Like my dad’s going to go for that.” She pressed a hot key, bringing up Lady Bella’s Pegasus mount, then started her flight back to the main city of Camelot.

“Don’t worry, I’ll think of something before Friday.”

There was silence on the other end of the line and for a moment she thought they’d been disconnected. Then, “Friday?” Stu asked.

“Yeah, you know, we have to wait until the dungeon resets before we can try again,” she said, surprised at having to explain.

Stu was the ultimate expert on everything Camelot related. In fact, he often spent more time on the game’s wiki boards learning the fights than doing his homework.

“Actually no. They’re doing that patching, remember?” she said. “The servers are going to be offline all weekend.”

“What do you have against Friday?”

Sophie frowned. “The team?” she repeated before she could stop herself. Then realization hit her. “Oh. Right. Soccer.” She made a face.

It had been three weeks already, but it was still hard for her to believe her best friend—for some unfathomable reason—had made the crazy decision to join the school’s soccer team. An unexpected move that reeked of his stepbrother Lucas’s influence. Lucas was the resident jock in the family. A star player on their school’s football team. Stu, on the other hand, had always been more mathlete than athlete. A geek of the highest order.

Until now, that was.

“Just tell them you’re busy doing something actually important,” she said. “Like downing Morgana with your best friend. “I’m sure they’ll understand.”

She said it as a joke. She expected him to laugh. Instead, there was dead silence on the other end of the line, causing an uncomfortable feeling to worm its way to her stomach. What was going on here? Did he actually want to hang out with the team—off the field? Instead of playing video games with her? They always gamed on Friday nights. It was tradition! And he was going to break that now? Now that they were up against the most important fight of their gaming lives?

Stu cleared his throat. “Look, I’m sorry, Soph. Can’t we just do it Monday instead?” He paused, then added, “I mean it’s just a video game right? It’s not like Morgana is going anywhere.”

She could hear the anger and confusion rising in her voice and was a little embarrassed that she was getting this upset. But still, who could blame her? For the past year she and Stu had lived and breathed Camelot’s Honor. Slaving away on menial quests, gaining experience, and rising in levels. All to get to this point.

And now he was bailing. To hang out with the cool kids.

“Whatever,” she retorted. “Maybe I’ll just find a pickup group and slay Morgana with them instead.”

“What?” Stu cried, suddenly sounding concerned. About time. “You’d kill her without me?”

Okay, fine. Maybe that was going a bit too far. He’d only asked for day. But still! She scowled. This had to be Lucas’s influence. After all, Stu didn’t even like sports. He didn’t even play the video-game kind.

Also? He was terrible at them. In fact, that was how they’d first become best friends back in second grade. No one had picked him for the dodgeball game and she had found him, sitting on the swings all alone looking like he’d lost his pet puppy.She’d asked him if he wanted to play Minecraft on her iPad and he’d eagerly agreed. And the rest was history. Best friends forever. Happily ever after. Till death do we part.

“Never mind,” she muttered. “We’ll do it Monday, or whatever. Just let me know when you can spare some precious time.

“Wait, are you mad at me?” Stu asked, sounding bewildered.

“Of course not!” she snapped, realizing she didn’t sound very convincing. “Anyway, I’ve got to go. Dishes, remember?”

“But you’re signing on later, right?

“I don’t know. The cheerleaders might want to go get manicures.”

THE CAMELOT CODE: THE ONCE AND FUTURE GEEK 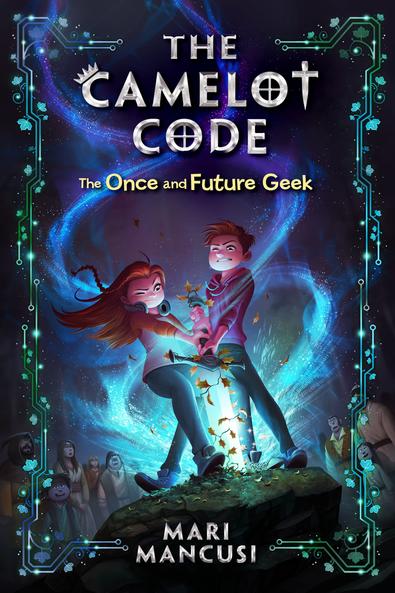 The stench of death hung heavy in the air as the group made their way through the ruined castle. Dark shadows danced menacingly across battle-scarred walls while the windows rattled a warning. A nightmare scene to frighten off even the bravest of heroes, and Lady Bella knew she and her companions were far from that.

But they’d come too far to turn back now.

And so they pressed on, through cobweb-draped halls, down crumbling stone steps. Ducking low-hanging archways, crossing rotted-out floors. Until the corridor dead-ended at a matching set of ironbound doors, looming tall and wide before them. The entrance to the sorceress’s chamber.

Lord Vanquish raised his glowing red blade while Sir Melvin mumbled protection spells under his breath. Bella’s staff crackled with magical energy and a chill tripped down her spine.

This was it. This was really it.

“We have fought long and hard, my friends,” Sir Melvin proclaimed, his deep voice booming through the chamber. “At last, we stand at the doorway of our destiny.”

A small grin crossed Lady Bella’s face. She couldn’t help it. They’d waited so long for this day. And now it was finally here. Her heart pounded in a mixture of excitement and fear.