FUN FACT: The mountain ski resort featured in Golden Girl is loosely based on Killington, Vermont, where Mari loved to go snowboarding.

Hi there! I’m here to drop off Alexis Miller?”

I hugged my jacket closer to my chest as Mom slid down the rental-car window and addressed the man sitting in the guard shack outside Mountain Academy’s wrought-iron front gate. It was only November, but the temperature had dropped, and the wind swirled through the car, stinging my still-sunburned nose. I breathed in, smelling hints of snow on the horizon. Most people didn’t believe you could smell snow, but you could. There was this sweetness to the air just before the first flakes started to fall. The forecasters had predicted at least twelve to fifteen inches tonight, and Mom had decided to cut her trip short in order to get back to eighty-degree temperatures and sunshine. After having been married to my dad for twelve frostbitten years, she’d say, she’d had enough of the white stuff to last a lifetime.

The gates creaked open and the guard waved Mom through, allowing us access to the long, windy road flanked by large oak trees that led to the main campus. We’d missed foliage season by a couple weeks, and the trees’ once-colorful leaves had faded and fallen—now blanketing the road in corpses of beige. As the bright morning sun filtered through bare branches, peering curiously into the car, I slouched in my seat and slid on my sunglasses, missing the vibrant palm trees in Mom’s backyard already.

Mountain Academy for Skiers and Snowboarders used to be a traditional New England boarding school—offering elite educations to children whose parents summered at Cape Cod and wintered in Saint Barts. And for a time it seemed that it would stay that way forever, mass-producing future lawyers and doctors and politicians from here to eternity and beyond.

But then, in 1969, the stuffy founder of this stuffy institution was found dead—facedown in a plate of stuffing. It was Thanksgiving. (I couldn’t make this stuff up.) And the school ended up being passed down to his hippie-dippie fool of a grandson, Irving “Call me Moonbeam” Vandermarkson, who had somehow, over the years, managed to avoid becoming lawyer, doctor, or politician, even after graduating (barely) from his grandfather’s prestigious school. In fact, Irving had somehow managed to avoid choosing a career at all. Until this one was dumped in his lap.

But Moonbeam wasn’t interested in running a boring old boarding school like his grandfather. After all, he argued, there were plenty of other places to go if you wanted to suit up in a blazer and tie and pad your college application with Harvard-friendly extracurriculars. Moonbeam wanted to run a school where kids could learn something more spectacular than fractions and fiction and filling in the blanks.

So he quickly ejected the school’s then-current crop of future leaders of America and replaced them with a ragtag team of young but promising skiers, remodeling the place after one of those famous Russian sports schools founded in the 1930s. As you can imagine, the board of trustees was horrified! How embarrassing! The school’s reputation would never recover after these scruffy juvenile delinquents with funny boots and sticks strapped to their feet began parading down its halls.

But, go figure, it turned out Irving Vandermarkson—dirty hippie and ski bum extraordinaire—was actually onto something. In fact, his disgraceful little ski boarding school became a raging success. Today, more than one hundred Mountain Academy graduates have earned a spot on a national team—with fifty-four of them competing in the Winter Olympics and thirty-nine becoming medal winners. The school went from being a total joke to the place to enroll if you were serious about your winter-sports career.

And I had always been serious. Until now.

“Do I really have to do this?” I asked for the umpteenth time since we’d gotten off the plane in New Hampshire. “I mean, why can’t I stay in Florida with you this winter?” Hanging out with my friends on the beach, tanning and talking and flirting with cute lifeguards sounded so much better than freezing my butt off up here while trying to chase my dream for a second time.

Mom offered me a rueful smile. “I wish you could,” she said, reaching over to pat me on the knee, while keeping an eye on the windy road, already slick with black ice. “More than anything. But I don’t make the rules.”

When my parents split up three years ago and my mom moved out of state, the court awarded my dad custody from September to May so I could continue attending Mountain Academy. This year, however, Mom had gotten special permission for me to stay down in the Sunshine State until I finished my physical therapy. But now the doctors had given me a clean bill of health, leaving me no other choice but to trek back to the frozen tundra for the remainder of the winter.

I’d tried to argue that I’d rather walk over hot coals in bare feet while listening to Justin Bieber songs on an endless loop than return to this place. While Mom certainly sympathized, there was nothing she could do.

“Here we are,” she announced unnecessarily, forcing perkiness as she pulled the rental car up to the front entrance of the school. Like most fancy New England boarding schools, Mountain Academy boasted a redbrick facade, complete with the requisite Ivy League ivy withering on the walls. I used to think it looked pretty cool. Like an old Victorian mansion from one of my mother’s beloved Jane Austen books. Now it resembled a prison.

I dragged myself out of the car, my legs feeling like lead, and walked around to retrieve my suitcase from the trunk. Most of my stuff was already here, stored at my dad’s place, a little staff cabin a few yards from the boys’ dorm. I used to live there with him, but last year, after much begging and pleading, he’d allowed me to move into the girls’ dorm like everyone else. Which, at the time, had been a dream come true. Now, however, the idea of facing all the curious stares and pitying looks from the student body—not to mention the smug smile of my archnemesis, Olivia, herself—made me wish I could hide out in his cabin for the entire winter.

As I yanked the suitcase from the trunk and started lugging it toward the school, Mom scurried after me. “You sure you don’t need help with that?” she asked, her eyes falling worriedly to the bag in question. Something she would have never asked me, I realized, before my accident.

“Okay, okay,” she agreed quickly. Too quickly—as if she’d realized what she’d implied and felt bad about it. She grabbed me by my shoulders and pulled me into a big hug.

“I’ll miss you, baby,” she whispered in my ear.

“You’re going to be fine. Really. It won’t be as bad as you think.”

“I’m serious, Lexi. . . .” Her voice drifted off, and I could tell she was searching for something positive, and, of course, completely cliché to say in a vain attempt to make me feel better. Like how I should get right back on that horse. Or time heals all wounds. Or I should turn lemons into lemonade. Or maybe the most ridiculous one of all: It doesn’t matter if you win or lose; it’s how you play the game.

Yeah right. Tell that to the Olympic committee.

“It’s okay, Mom.” I tried to reassure her. “I’ll be fine. Promise.” I gave her my biggest, best fake smile. The one I’d been using all year long to satisfy concerned aunts and uncles and doctors and friends. The one that said, I’m fine. Even though I wasn’t.

Mom met my eyes, as if not fooled for a second. Then she sighed and planted a kiss on my nose like she used to do when I was little. “I know you will. You’re my strong girl,” she whispered, giving my shoulders a comforting squeeze. “My little warrior princess.”

She started back to the car, then stopped. I watched her turn back slowly, her face a mess of mixed emotions. “Just . . . ,” she started, then trailed off.

I furrowed my brow, wondering what she wanted to say. “Just what, Mom?” Was she finally going to tell me? Admit what I’d overheard the doctor say when he thought I wasn’t listening? She’ll be able to snowboard again, he’d told her. But she may never be what she was before the accident.

Which, in doctor speak, roughly translated to: You know those silly little Olympic dreams? Yeah, not going to happen. Not in this lifetime anyway.

Mom was silent, and I could practically see her warring thoughts battling one another inside her head. Then, at last, she sighed. “Just don’t let him push you,” she said in a quiet voice. “Trust your instincts. Go at your own pace. You have nothing to prove to anyone. Even if . . .” She trailed off again, and I knew she didn’t want to say out loud what we both knew could be true. “You’re special,” she amended. “No matter what. Never forget that.”

Oh great. I could feel the lump rise to my throat. The tears well up in my eyes. I’d promised myself I wouldn’t cry. Not here. Not where someone could see. So I swallowed down the lump and swiped away the tears, forcing myself to nod my head.

“I’ve got to go,” I mumbled, grabbing my suitcase and turning to head toward the dorm. I could feel Mom’s eyes on my back, watching as I stumbled under the main archway leading into campus, unable to help but catch the familiar school quote above me, etched in stone and echoed by teachers and coaches all over school.

What would you attempt to do, it asked, if you knew you could not fail?

I used to love that quote. I used to say it all the time. Wrote it in notebooks, stickered it to my board. The same board that had cracked in two that fateful December day when I learned the truth.

That I could indeed fail. And that failure really hurt.

Want to read the rest? Click here to get your own copy!
Or... if you'd like an autographed copy signed by Mari herself, you can find one here. 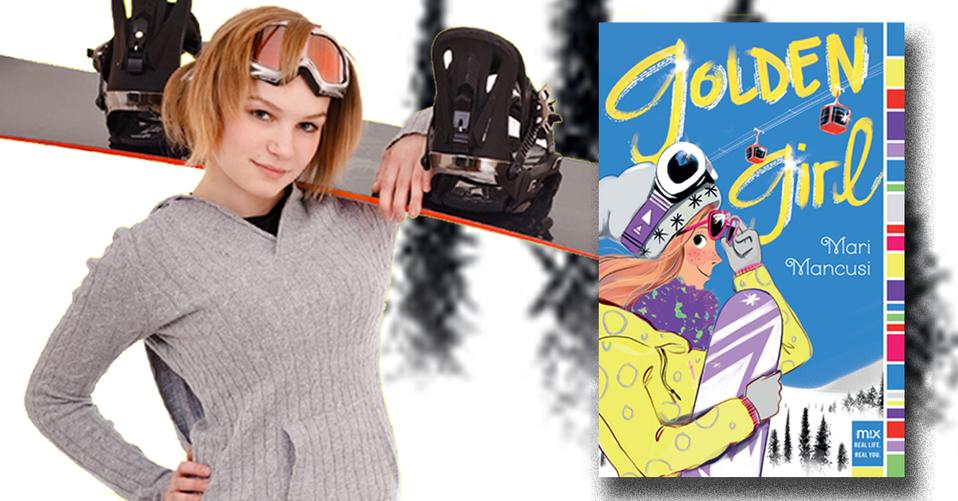 Lexi Miller—a.k.a. “Golden Girl”—is the snowboard cross queen. As the most promising student at her elite Vermont ski and snowboard school, Mountain Academy, Lexi is a shoo-in for the Olympic-level trial team. That is, until a freak fall during a snowboard-cross competition crushes her dreams and puts her future at stake. A year later, Lexi’s back at school, physically healed, but still mentally scarred. Every time she straps on her snowboard, severe panic attacks set in.

To make matters worse, her best friend has turned her back on her, her archenemy on and off the slopes is determined to make her life miserable, and everyone is treating her like an outcast. The only person who seems to understand is Logan Conrad, a “staff rat” whose mother works on the mountain. Lexi finds herself drawn into his world just off the mountain, and discovers she has a knack for singing—something her new friends encourage. But Lexi’s dad—who also happens to be her coach and lead instructor at school—has different ideas about his daughter’s new friends and talent.

Will Lexi ever be able to figure out what exactly happened on the mountain a year ago while trying to balance her own dreams with the dreams her father has for her?

Want to read the first chapter? Scroll down! 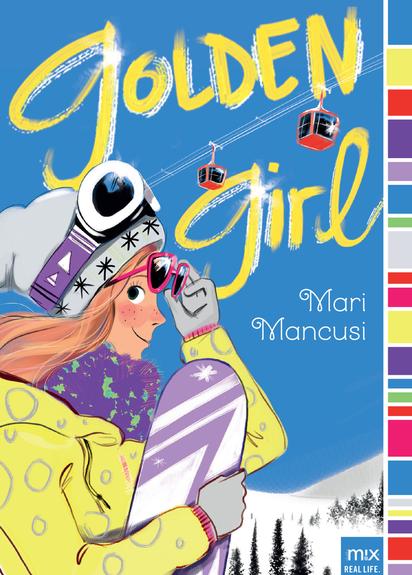